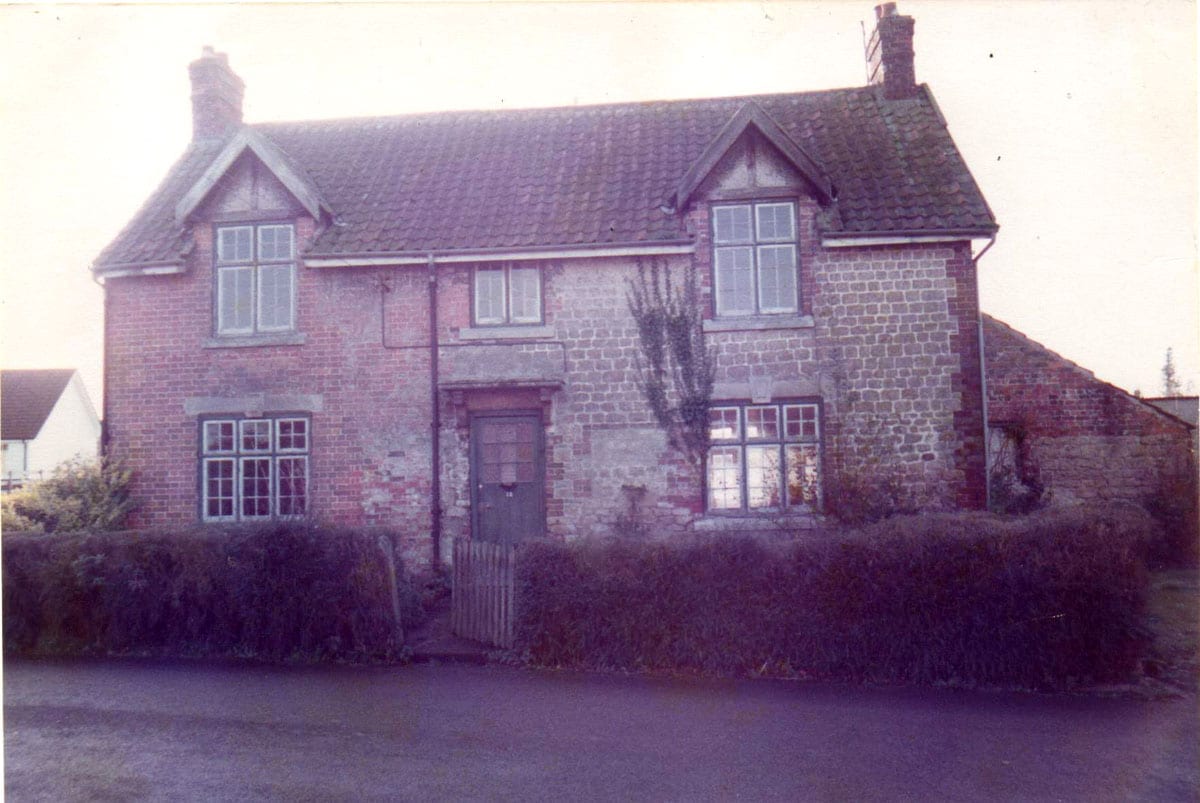 Cottage in St Mary’s Lane before renovation in 1983

Enid was born at home in the left hand front bedroom of St Verna House in St Mary’s Lane in 1935. She was the second of six children.Enid’s mother, Mary Tubb, had come to live at St Verna House at the age of 14 with her Grandfather Tubb and his second wife, Mrs Masters, whose house it was. Grandfather Tubb had come from Frome Leather Works to be employed at the Tanyard and at first had lived in that part of Redpit where there was a row of cottages, now no longer, that is the present day Shepherd’s Mead.
Mary Tubb worked at Jeffries’ glove factory (and she appeared in a photograph of the factory held at the heritage centre). Eventually she did home glove-making for Dent’s.

At the age of twenty, Mary married Frederick Millard (24), who was born at Prospect Square, Westbury. They were married in Holy Trinity Church, Dilton Marsh in 1932 by the Rev. West.

Frederick worked in the Angel Cloth Mills, but was not there long as the wool dust made him asthmatic. He joined the Wiltshire Regiment and served as a soldier in the war. After the war he worked for the Ministry of Agriculture as an advisor. His work involved driving a van to agricultural shows with leaflets and information about seed trials, etc. He received the British Empire Medal for this work.

Mary and Frederick remained at St Verna House in St Mary’s Lane all their married lives.
Their lives and that of their family revolved around the Church. There was a big congregation so events organised by the church such as the summer fete were very well attended. There was an annual flower show held in a farmer’s field, behind the white cottage down St Mary’s Lane. A farmer also allowed another field to be used for football games, between St Mary’s Lane and Bremeridge Farm (beyond the last house into the drove then the three gates). There were no changing facilities, people washed when they got home.

A fair came to this field once a year with steam-operated funfair and dodgems. Every bit of equipment had to cross the little bridge. Enid often played on the railings of the bridge, for example, head-over-heels, and sometimes into the brook. Her father and a neighbour would clear the brook of rubbish once a year to keep it clear. Enid thinks this stream joined the one at Bremeridge, thence on to the Tanyard, and onward to Westbury Leigh. No permission was needed to use these fields for games.
Enid went to Dilton Infants school on the High Street. It was originally called the British School which meant it wasn’t “Church”. The Church School was next to the Church.

Enid started school aged five. There were intakes three times a year as you reached your fifth birthday.
During the war, Enid along with other youngsters went to the Coral League organised by the vicar’s daughter, Mary McKenzie. They knitted squares for blankets, balaclavas, scarves, comforts for the troops at the Old Vicarage, which is beyond the New Vicarage. The glebe field, a portion of land that was the vicar’s benefice, was used for playing tennis. The new school is built on this.

There was a Co-op in Petticoat Lane opposite the turning to Silver Street. It’s a large building on the right with two storeys. You had to go upstairs to get your dividend. Enid remembers that her mother’s number was 1451!
Also in Petticoat Lane, facing you was a grocer’s shop and Enid can remember seeing shelving with many small drawers for loose commodities.

Where the shop is now, next to the Memorial Hall, was a grocer’s shop. There was a bakery along Whitecroft and Enid fetched bread, hot to take home. You broke the top off the cottage loaves to add butter and it was delicious when warm. She remembers that you could buy a loaf for 1d (an old penny).

Opposite the Church was the Post Office, and today’s hairdresser premises (nobody had their hair done in the old days) was Mr Gunstone’s cobblers shop. There was a grocer’s next to the Prince of Wales pub and another one at the left-hand corner at the beginning of Stormore. At the bottom of Stormore there was a very small sweet shop in a house. There was also a Blacksmith’s at Tower Hill.

The George was at St Mary’s Lane, opposite Dutts. It was a pub and a farm, so Enid would collect the milk from the bar. She would take a tin can to get the milk. A pony and trap owned by Mr Styles also delivered milk. The King’s Arms pub near the church is now a house, but the sign is still visible. The pubs were visited after going to Church.

The British Legion Serviceman’s Club became Dilton Social Club. It was in a Nissan Hut – later made more permanent. You could play skittles and snooker there.

A Guide company was started after the war which Enid attended. It met in a small room attached to a house at the back of the current hairdresser’s shop.

The Rev and Mrs Sercombe inspired a dramatic society, a tennis club (at the glebe field) and a choir. The choir didn’t have any children as members, and went to specific events and clubs. Enid took part in one-act plays performed at the hall.
At the age of eleven Enid went to Trowbridge High School for Girls, and went by train from the Halt. It was a small steam train with two carriages, – one for the boys and one for the girls. She stayed at this school until the age of eighteen, and then went to teach training college at East Hampstead Park, Berkshire, for a two-year course between 1953 and 1955.

After college Enid came back to St Mary’s Lane and taught at The Minster School, Warminster. She stayed there until she married Michael Holbrow in 1959. She went on teaching until John was born in 1960 and Mark in 1961. They lived in Warminster, then came to Westbury before returning to Dilton, where they lived in a bungalow in 21 Petticoat Lane. She was asked to return to teaching and was able to take her two young children into the reception class. She taught at the school she herself had attended in the High Street from 1964 until 1984. She remembers the great celebration of the school’s centenary on 15th July 1983 and has photos of this. 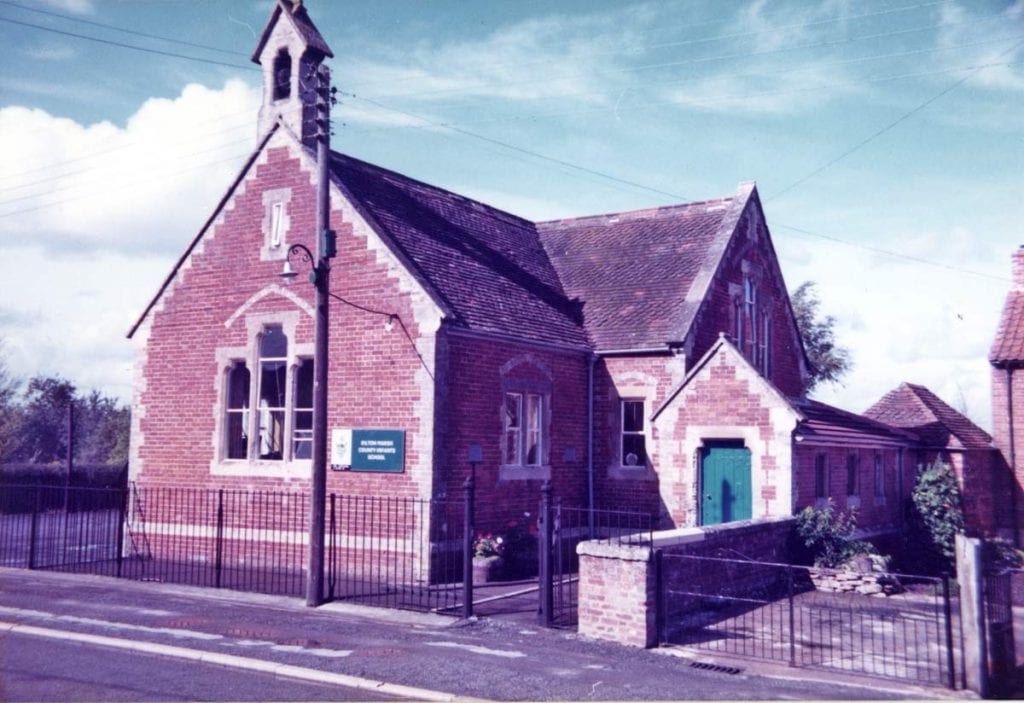 Infants School before it closed in 1988

The school was closed around 1988 and remained derelict for a long time. Enid wrote a very good poem about this.
She also wrote “A History of Dilton Marsh” based on a Parish Magazine of 1950. This was made into a booklet for the Church Fete of 1975.

There were Sunday School outings in the village bus based at Millard’s garage, which was on the site of the present garage. The bus used to go to the market in the centre of Frome on Wednesdays. The garage also had a taxi if anyone needed one.
There was a green double-decker bus run by the Western National between Dilton and Trowbridge.
Before the war the village was much the same as it had been in Enid’s parents day, but changed a lot after the war with more buildings and social changes.