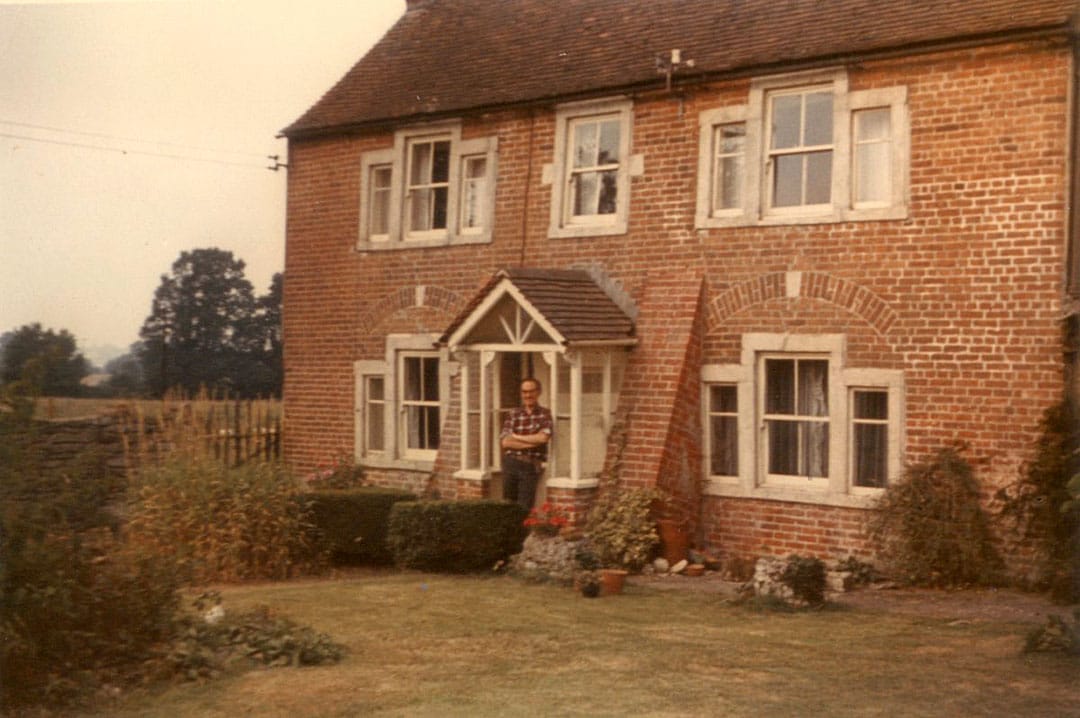 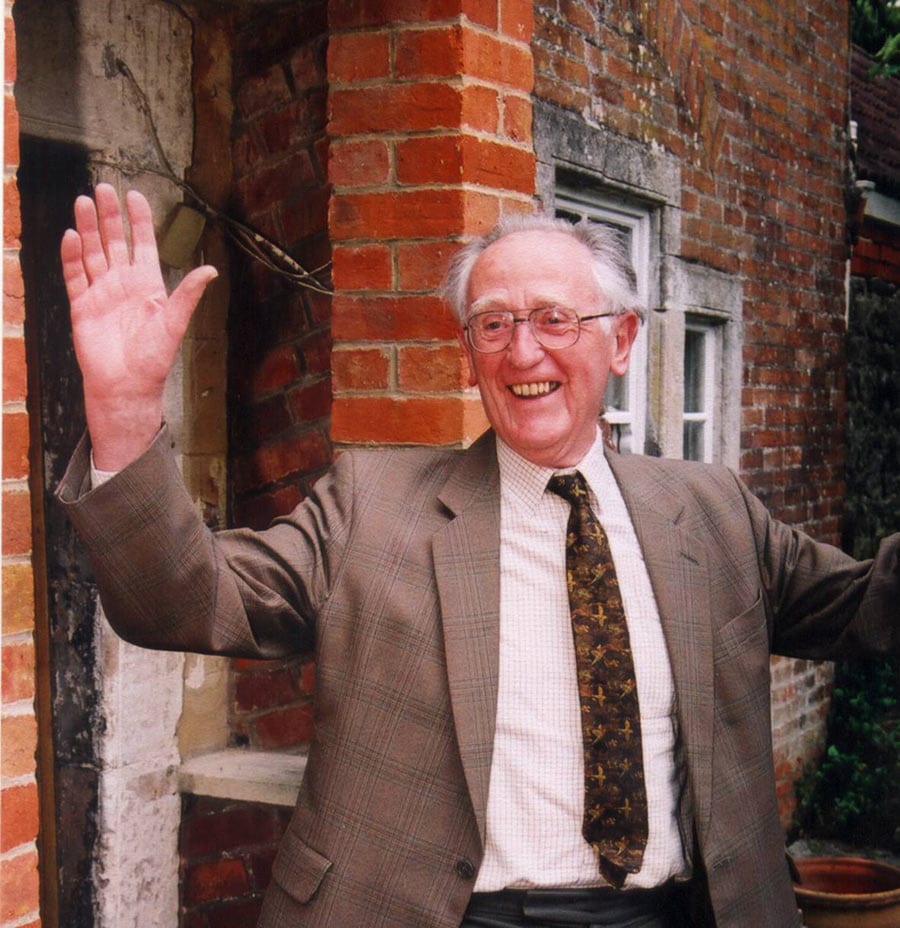 I was born in St Mary’s Hospital, Acton, West London. My mother was from Kent and my father from London. I stayed in Acton until after the war when I came out of the Air Force. Ruth, my wife, was born in 41 High Street. Her father, Clem Cornish lived and farmed here. Clem was born and lived in a farm on the Bratton Road – on the left. He married Mary who came from Somerset and they rented this farm from a chap who lived somewhere in Kent. He was a Knight or something. They lived here as tenants and then sometime in the 1920s or early 30s they purchased the place from the landlord.

This house was built in 1764.Met my wife by accident. The Air Force booted me out in early 1944 and I was told to go to a particular hospital for medical treatment and I went to the wrong hospital! This caused confusion and they 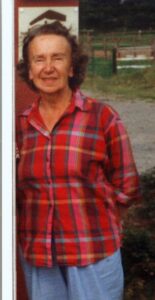 sent for papers and the physiotherapist who treated me was Ruth. She was already married although they had separated. Much time later she divorced her husband. I had to go for treatment for several years, and we gradually became acquainted. We then loaded up a little Morris 8 and came to Wiltshire. Ruth had got a job as a physio in Devizes and I got a job as a Milk Recorder at the Milk Marketing Board.  This job involved visiting farms and recording the amount of milk taken from each cow as this affected the value of the cow. So we had to go and check that these recorded amounts were genuine. We called in on spot checks and stay for the entire milking by hand at that time. This was in 1950. We lived in separate lodgings in Devizes as of course you had to in those days.

We married on Christmas Eve in 1954 in Trowbridge and moved to Bristol. I was working as a Driving Examiner which became the rest of my career. We then went to Salisbury to live. We came here eventually in the winter of 1962/63 after my wife’s father died when we had the awful snow. Down by the tannery it was about six or seven feet high in snow. There was only room for one vehicle to go down the road. Ruth used to drive me to Westbury and I used to keep my fingers crossed that a train would arrive – sometimes we had to wait a long time!

My mother-in-law was still alive when we moved here. We looked after her and she lived for a further three or four years. She was a lovely woman. Ruth’s father was in his 70s when he died and her mother in her 80s.

When we came here the Jones family from St Mary’s Lane used to rent the farmland (not the buildings) and farm the land. It was a dairy farm of about 25 acres. Clem (Ruth’s father) also used to farm land behind the Phipps Arms and also along the Bratton Road. I then reclaimed the land and had our own cows. I used to milk by hand and then bought our first outdoor milking machine from the old Wiltshire Framers at Melksham. We had about eight to ten cows with four or five in milk at any one time. We also had four or five beef animals which we used to sell to a slaughterhouse in the Westbury area.

I supervised the farming of the land, but the chap who did the work lived in a bungalow at no. 45 High Street. He was a retired building worker who knew quite a bit about farming. His name was Fred Hooper, a local man, who had worked in a building firm called Holdaways in Eden Vale Road, Westbury for most of his working life. When he died his wife sold the bungalow to my wife and I and we passed it on to our charity.

With regard to starting up what is now Fairfield College, my wife was involved in Devizes as a physio in an organisation for young people who needed help and it was called something like an opportunity group. She felt she would like to take this further, and so we called a meeting in the memorial hall to which we invited members of the village. We advertised it and we had help from what was then the National Society for Mentally Handicapped Children and Adults and we worked closely with them. They came up from Yeovil. There was a young man called Ambridge who was seconded to us for a year who was a member of that society and he went abroad eventually as a missionary. He helped get us off the ground. This was in about 1974/75. The meeting in the village was to tell people what we had in mind. A chap named David Carter, manager of the Yeovil branch of the Society came and he spoke to the village. The response was wonderful. At the end of the meeting they had formed a 100 club and had filled all the vacancies. Also the ladies of the village used to come and set up trestle tables at the gate of the farm on the roadside and sell our produce, such as milk and cheese which we made, and fruit and vegetables which we grew. They did this voluntarily – it was amazing really.

The first students came in 1975. We advertised and had a film made which cost quite a lot of money in those days which we sent around to local authorities all over the country, and we sent brochures and letters, and publicized it as much as we could. We were also on the Points West television programme. We had very small numbers initially – about five. They came from Trowbridge by train. They were mainly local although one or two came from further afield but were in lodgings in Trowbridge. Students had to be 16 or over and we used to put a limit of up to age 25. We wanted them to be younger than 25, really, as much as possible, to allow them to gain as much help to support them to return to living in the community. We had some students staying with us for about nine years, we initially had three youngsters living in our house – two girls and a boy. All the people in the village were marvellous (I think we only had one complaint), and our youngsters used to go and do people’s gardens and other jobs.

We have about thirty odd students now with almost as many teachers as students. They now come from all over – from Scotland, from abroad, all over the place. I have retired now so am obviously not as closely involved. It was necessary for students to come from a wide area as we needed the funds from different local authorities.

We created a charity and we wrote to charitable trusts who donated scores of thousands of pounds over a period. An excellent member of staff used to write to lots of these trusts who then used to donate monies from other charitable trusts. We were able to buy the nursery, greenhouses, etc with these monies.

When I first came to Dilton Marsh my first impression was that it was a very nice village with not many houses. Right opposite us were green paddocks. When we heard that there was going to be houses built there we were initially not very happy. We tried to get the authorities to make this area a village green. There was opposition to that. People were concerned that folks would gather in large numbers and possibly cause disturbances. The local authority, the owners of the land, were not prepared to do this as they wanted to sell the land. There had also been talk of putting a doctors’ surgery there also. This turned out to be just talk and supposition.

With regard to village landmarks, the house opposite was one – the Manse. There was a young couple living there when we arrived. Also next door to them was a very small house where a lady used to live whose son, I think, was a doctor who had a surgery nearby. I met Rosemary Smith many years ago when both she and I were milk recorders based in Devizes, so I have known her and her family for many years. I remember the children when they were youngsters at the first carnival in the village after the war. There was a short procession and in the back of the lorry was the Smith family playing their instruments. This would have been sometime after 1950. Not that there was a procession as such – it was more like a fete held here in at the farm. It then moved further down the village and Alan Powell was involved for many years. He was the Parish Clerk, a very clever chap – and of course the lane was named after him.

There was not very much traffic in the village when I first came here. And also people were very friendly. I remember my father-in-law teaching me how to cut a hedge with a scythe and whilst we were working, people used to stop and talk to us as we were working. I was not used to this coming from London!

With regard to pubs, I have never really frequented them other than in more recent years for lunch etc. There used to be the Phipps Arms in Westbury Leigh where the students used to go with their helpers for a snack. The landlord was very friendly.

Ruth was involved with the church but I never was. We then became Quakers and used to go to Bradford-on-Avon. I don’t think the church had a thriving community when we came to Dilton Marsh as I remember Ruth’s mother saying, on her return from a Sunday service, that there were not many people there. The vicar we had then was more concerned with his social status I think. After him there was a nice young man and he moved away somewhere in the west country.

I remember the fetes and carnivals. Chris Brown, who used to run the Spar shop, and I used to go around the village decorating the lamp posts. Ruth and I both helped with these, belonging to committees etc.

With regards to village characters, there was the Alfords who rented a little cottage from us. He was a railway worker. I do not know that much about them, but they had been in this neighbourhood for a long time. Delightful people. He was a warm, loveable character. There used to be Adrian and Shirley Peck, a retired army colonel who lived opposite here in the Manse. We went to the reception of a daughter’s wedding I remember. Before that there was a family living there who owned a shop in Westbury.

I have very fond memories of the village – of its great friendliness and amazing generosity.