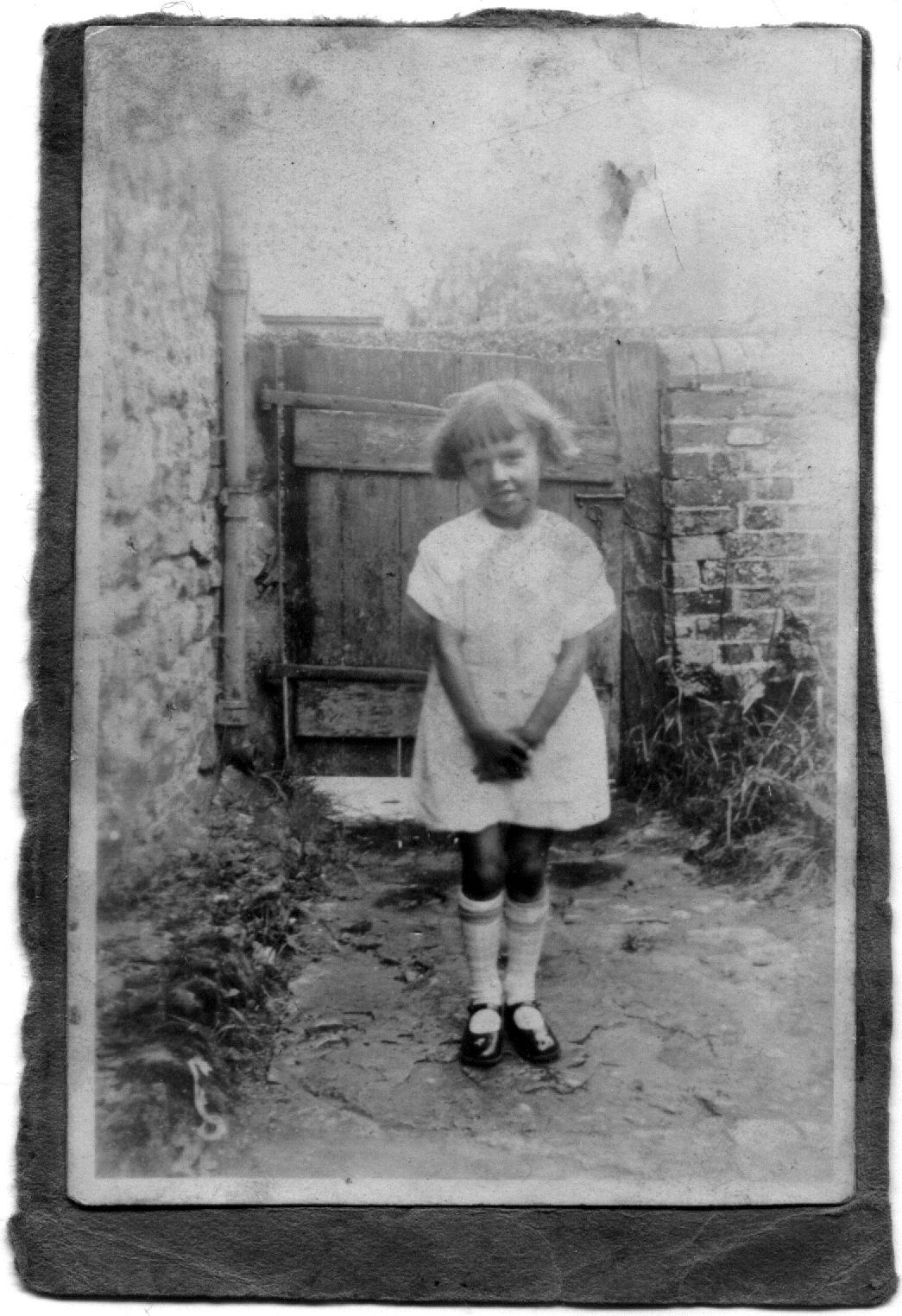 I was born Betty Millard in 1925. My father was Richard John Millard, son of Charles Millard, who was also born in the village. My mother was Elsie Florence Scane from Bishopstrow.
My grandfather, Charles Millard, originally came from Standerwick. He came to live in the village in one of a pair of cottages owned by the Phipps family which were opposite the Co-op (now Dividend House).
My grandmother came into some money and she bought the land on which the house I now live was built. My grandfather was a baker in Whitecroft. He delivered bread on a horse and cart round Dilton Marsh and neighbouring villages. I used to help him sometimes when I was a small girl.
My grandparents had 34 High Street buiIt around 1911 by some builders in Dilton Marsh named Brown. The bungalow behind the house was built in 1924.
My father, Richard, worked for the railways. He started out as a station porter and then progressed to a station foreman. Many of the men in the village worked for the railway. Once we started coming along, my mother stayed at home to look after us.
My parents lived in the bungalow, and I was the first child born to my parents there, in 1925. I had a younger brother and younger sister.
The area where my family lived (bounded by the High Street, Whitecroft and the start of Petticoat Lane) we called ’The Square’.
As a child, I remember that a lot of the villagers were quite poor, and there were many large families. A fair few parents worked in the tannery, some in very unpleasant jobs. Some of the better off families were those of engine drivers, who lived very comfortably in comparison.
In the 1930s, there were very few cars about. Lady Sybil Phipps had one, and so did the Vicar. There were quite a few motorbikes, but still a number of horses with carts in the village.

When I was a girl there were two schools in the village. The one next to the Church was the Church of England School. I went to the British School, further down the High Street opposite the entrance to the playing field. The Church of England School was much stricter. The Vicar went into the school almost every day. l don’t remember that there was any rivalry between the two schools. That school was attended by mostly by non-conformist (chapel) families.
If a child passed the exams, they went to the High School in Trowbridge. If they didn’t, they went to Westbury Secondary Modern School at the age of 11 (now called Matravers School). The exception were children at the Church of England School – if they didn’t go to High School they could stay at the school in the village until they left school at 14 years old.
I had what I’d call a ’light education’ at the British School. We covered the general overall curriculum. I remember doing country folk dancing at school, and being taken to an annual folk dance festival by coach to the Corn Exchange in Devizes. We also did maypole dancing at fetes and other similar events. The headteacher when I was there was Miss Gertrude Edwards, who lived next door to Stormore Chapel. When I was at school, she had a lovely wedding in Dilton Marsh Church and was after named Mrs Rabbits.
From the age of 11, I went to Westbury Secondary Modern School, and walked there each day. Children who lived at the far end of the village, past the Estate, were taken to school each day by coach.

There were a number of general stores in the village when I was a child. Firstly there was a shop opposite Friars’ Close. This was run by Mrs Lawrence who went into business after she was widowed.
The Co-op was in Petticoat Lane from 1920 to around 1965, and was then bought by Brian Macey.
The shop joined onto the Prince of Wales was owned by Frank Bull. Tommy Allen had a shop opposite the Green on the left as you go into Stormore, then there was another little store on Stormore on the right as you go down the hill.
There was also a small shop on Tower Hill.
The shop which is now the ’Crowning Glory’ hairdressers used to be where Harold Gunstone, a shoe repairer, worked. Later, Freddy Hillman took on the shop selling Ladies’ and Children’s clothes, in partnership with a relative of his wife.
The Post Office was next to Dilton Motors.
There were three bakers in the village at one time. My grandfather was one of these, but there was also one run by Gilbert Shepherd behind where Brian Macey lived (later a fish and chip shop), and another run by Arthur Millard in the house next to the Spar shop where Mr Brown lives.
Milk, bread, fish and meat were all delivered to your door.

Most social activities in the village at that time revolved around the Church or Chapel. The exception was football for the boys.
Also there was monthly meeting with tea in the Hall for ladies which I think was to do with the Conservative Club. They also held a Christmas Party for children in the Hall every year.
The Phipps occasionally allowed a fete to be held in the grounds of Chalcot House. They didn’t have much to do with the village other than to ensure the rent was collected for all the houses they owned in the village. Not many people owned their own houses.
I remember the George V silver jubilee party in 1935 in the field where Fairfield Farm college buildings are now. We were given a commemorative mug and there were children’s sports. A similar party was held in 1937 to mark George Vl.

There was a Miss Edwards who lived in St Mary’s Lane, which we called Slob Lane. She had a really strong accent and a distinctive chuckle.
The Verger at the Church was also a real character. He lived in an annexe attached to the school and carried the cross for church services. He had a really mournful expression.
The vicar at the time was the Reverend Mackenzie.

Dilton Marsh was said to be on the flight path for bombers, and we heard of the occasional bomb being dropped, but nothing nearby. We heard news of the progress of the war on the radio. Quite a few young men from the village went off the fight and didn’t come back. My father, working for the railway, was in protected employment so wasn’t conscripted, and my brother was too young.
A lot of evacuees came to the village during the war, mostly from London. However a lot didn’t stay because they found rural life difficult, or there were domestic issues which meant they had to return. My grandmother had an evacuee for a short time. I remember one of them couldn’t get over someone having a coal fire as they hadn’t seen one before.

I met John Vaughan when I was working at Boultons glove factory in Westbury Leigh. I was employed to hand-sew the gloves. He came from Upton Scudamore. I worked with some cousins of his and that is how I was introduced to him. We married in Dilton Marsh Church in 1949, and moved into the house where I now live which we shared with an older woman.
I have two children. My daughter still lives in the village. My son, with the help of John, bought the land at the corner of St Mary’s Lane and built a house there.
When my children were small, I worked as a Dinner Lady at the Junior School next to the Church.