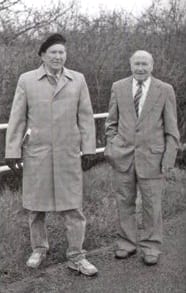 On March 26th 1944, a Royal Canadian Air Force Halifax Bomber (V for Victor) was on a training flight over Wiltshire. Following engine problems, the crew bailed out, with the plane finally crashing at Bradford-on-Avon.

One of the crew, Leading Aircraftman Craig Reid, parachuted out over Dilton Marsh, landing at Clivey, in a field adjacent to Brian Whitefield’s present home. As he landed, Leonard and Ivy Pickett were pushing their baby daughter home in her pram, after a visit to Len’s parents in Standerwick.

They noticed a pale shadow falling to earth and heard cries for help. Len went through the hedge into the field and helped Craig out and onto the pram. They then pushed him home to their house in Clivey.

The following day, at work on his family farm at Standerwick, Len was to find the body of another crew member – Flight Engineer Sergeant Norman Simpson, who had tragically fallen to his death, due to a poorly fastened parachute.

Len and Craig were reunited 50 years later, when a Commemoration Service was held at Bradford-on-Avon and a memorial plaque for the crew members who lost their lives was unveiled.

Leonard’s daughter, Angela, has recorded here some of her father’s memories of the rescue.

The Local History Society would like to thank Jonathan Falconer (Aviation Historian) for sharing the results of his research – The Men who Fell to Earth.

Angela Pickett is going to be talking about her Dad’s experiences during the War in Dilton.

Can you tell us what you remember your Dad telling you . . . how he came across this guy? What was he doing?

He’d been round his parents at Standerwick and was walking back at what we call the ‘second white railings’ just at the end of Clivey straight. Dad had seen this white . . . whatever . . . floating down through the sky and he thought, well you know, “What was that?” And then he heard somebody saying “Help”, so Dad went round to the top of the hill – in through the gate and down, and it was Craig Reid in the parachute. So my mother pushed the pram up the hill to the gate, and Dad helped him out . . .

What sort of a state was he in?

Very disorientated. Obviously he didn’t know where he was or what had happened or, you know, cos how he’d come down and landed half in the hedge and half on the field. He was a little bit tangled up . . . and so anyway, Dad freed him up and they put him on the pram and pushed the parachute in the pram – there was a baby in the pram and then they pushed him home . . .

Clivey, just about 200 yards, 300 yards – not far . . . down to Clivey cottages and it was the middle house and they took him in and made him a drink and give him something to eat and what have you.

So he was able to take advantage of that?

He wasn’t completely out of it?

No, no, no, he’d sort of come round a bit by this time, and then my father cycled up Stormore to the phone box to ring the police and they came and got him. And the very next morning when he went round to get his father’s cows in round Standerwick, round Rudge . . . He seen something, he said it was a really cold frosty morning, everything was really stiff white and he could see this “something” in the middle of the field, half way up the bank. Cos the field was flat at the bottom and then it went up and he was up on the bank bit and he could see this . . . “something” . . . there. So he said he ran up there and there was a man, and he was squat down in a squat position. He was obviously dead and where he’d come down . . . he’d always been told to do his parachute up and he never did, and they all said to him at one point he would slide out and that’s what happened. He slid out, so he came down from the same plane with no parachute and all the bones of his legs and his spur bones were actually dug into the ground. So they couldn’t move him because gravity pulls your bones on down and he was just planted there, so Dad had to get the police out yet again to get this one.

Do you think you’d have a reasonably accurate recollection of where that position was?

I could tell you exactly where it was, I showed you last week

Would you show me or Derek . . . and I’ll take a photograph of that?

You could do, I can show you exactly where it was.

And do you remember your Dad telling you about this?

Yes. He told all us children, yes, as we were growing up you know. Like, if we did go out anywhere, or you know, it was always “Oh I can remember what happened there” or every time we went down the hill it was “that’s where I picked the parachute up”. In fact we had the parachute for years, we used to play with it, as kids, we used to play with this parachute up the garden. We haven’t got it now obviously.

Did you see any officials after that, did anyone come round to your place to interview your Dad?

So the next he heard from Craig, the guy that he basically rescued, was how long after that?

He came down to unveil the plaque at Bradford-on-Avon, after 50 years of the war he came down. And it was on the radio that he wanted this Mr Leonard Pickett to ring this certain number and Dad heard it all day and just thought, “I don’t know whether it was me or not” and then when he said to my mother about it, she said “well for goodness sake, ring”. So he got her to do it for him . . . and sure enough, yes it was. So he came out and we all met down in my mother’s bungalow at Frome, they lived then, because Dad had had a heart attack and had to move somewhere flat. And there was no bungalows in Westbury, this was where they wanted to be but they couldn’t get here, so Dad being a Frome man, they moved to Frome. He came down and all the family met him down there . . .

That was Craig and his wife?

Yes, Craig and his wife, it was very emotional. Because he said, you know, that he’d saved his life and he couldn’t thank him enough and yeah, they were there quite a few hours one afternoon . . .

And did your Dad go to Bradford for the ceremony?

Did he hear from the guy again after that?

For me, I really would like to see where these things actually took place.

Well, I can show you exactly where it was.

Because that’s a real first for Dilton to have something happen like that.

That’s right yes, but it’s the little villages that get forgotten . . .