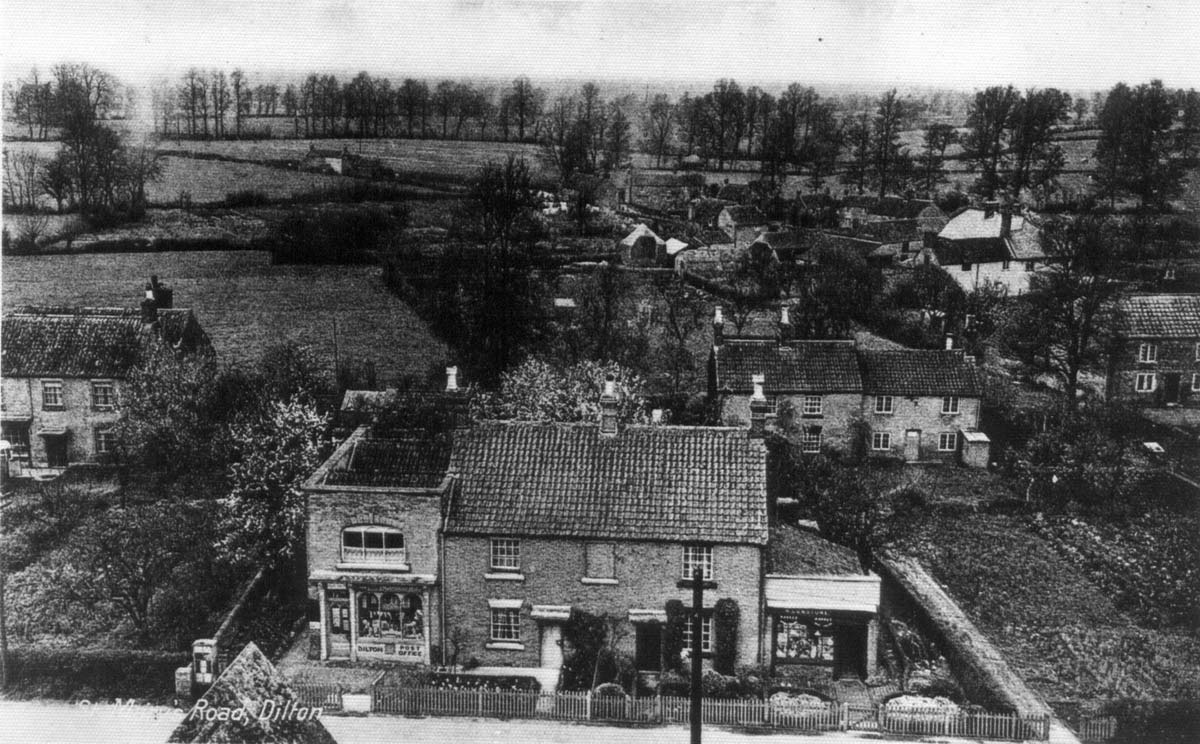 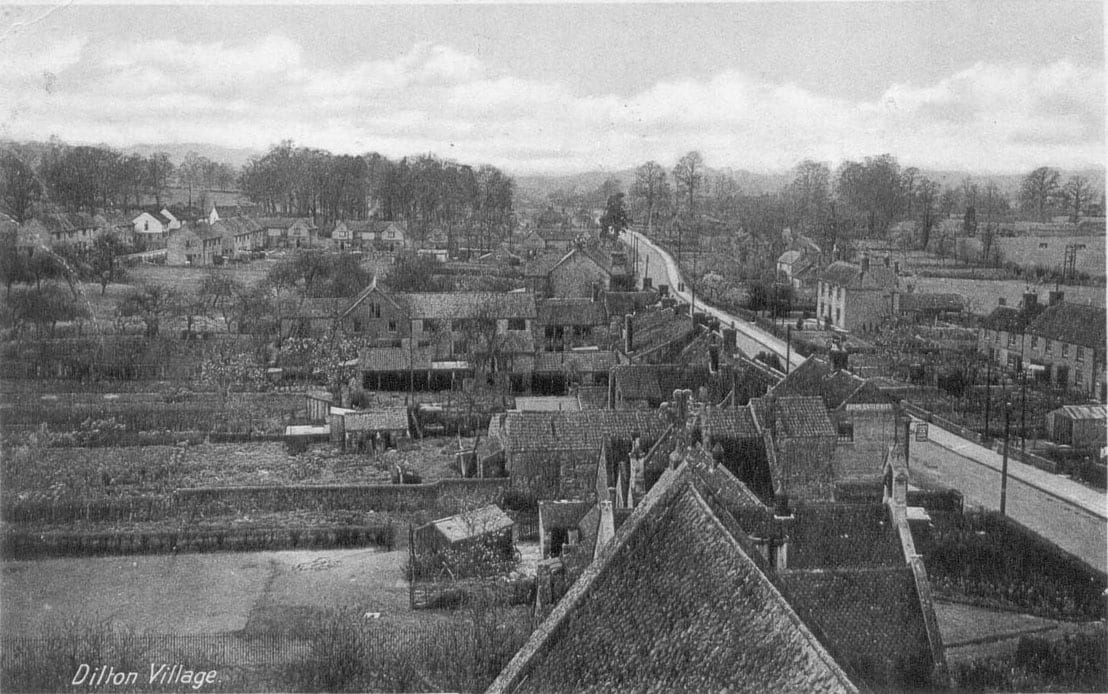 Notes on Dilton Marsh in 1930s

From notes of Interview by Halliday Twins with Robert Jones, Farmer (1985)

Originally, there were only three cars in the village, owned by Mr. Billy Pearce, Mr. Parson at Red Pit Farm (acted as taxi service) and the official taxi-hire, Mr. Millard at the garage. A charabanc ran weekly trips to Frome on Wednesdays and to Trowbridge on Tuesdays. There were no tractors, and a horse and cart, owned by Mr. Parsons and Mr. Bridge was used for delivering milk. Frank Chivers at the toll-house would deliver small parcels as the village carrier, and ran a service with his cart to Trowbridge and Frome.
Jobs in the village were mostly connected with farming, Mr. Gagen employed one man, Sam Webb at Clearwood Farm. Bob Parker owned the farm at the top of the hill, and employed Jack Ledbury, Steve Ledbury and Frankie Pearce. Mr Parson owned Red Pit Farm and employed Ray Freegard and a boy.

There was a grocers shop opposite Red Pit Farm, owned by Mr & Mrs Allen, which served Stormore and Clivey. There were also two other grocers shops, one in Clivey Road owned by Miss Davies, and one next to the Prince of Wales, owned by Mr. & Mrs. Campbell.
Mr. Coles lived in Dilton Farm (now Shepherds Mead) and employed two men, Mr. Jones’ cousin, Arthur and Bill Skein. A self-employed carpenter called Mr. Scott lived next to the school. Mr. & Mrs. Taylor owned the Kings Arms and employed Sam Penny as general labourer. Harry Millard kept the garage (started c.1938) and Mr. Hoare owned the post office next door, employing a house-keeper.

The vicar, Rev. Mackensie, employed a gardener, Mr. Farendon. The vicar had a cow, and a horse and trap.
There was a boot-mender and hairdressers adjacent to the post office owned by Harold Gunstone and his wife. Down Slob Lane (St. Mary’s Lane) Mr. Bull kept the George Inn, and a farm where Ruth Hawker lived. Mr. Jim Bull employed one man, Mr. Belgium, Mr. Phipps owned the coach-house at the top of the lane.

There was a small Co-op in the village, in Petticoat Lane where Macey’s now have their shop, which employed five people. It opened in 1921 and closed c, 1953/4. The manager was Mr. ??, Mr. Cecil Barkley his assistant, and the two Miss Escorts. The Spar shop was kept by Dusty Millard and his wife. It was a grotty shop and rather queer. There was a bakehouse in Whitecroft, owned by Mr. Jones’ cousin Percy, who employed Mrs. Bishop. There was a farm in Silver Street, owned by Lionel Young, which was demolished in 1957.
Breakspear’s Nursery at the top of the hill employed eight, and Fairfield Farm, owned by Mr. Cornisham, employed Stanley Crock. The tan yard employed sixty, tanning skins from abroad. The was no sign that it was on its last legs in 1907. It finally went bankrupt in 1983. There was a brickworks at Fairfield which had 15/16 workers making tiles and bricks. Mr. Len Chase owned Hisomley Farm at the top of the Hollow, employing one man. Squire Phipps at Chalcot House employing one, Percy Pollard the poacher, and Mr. Frank Brake at Dilton Home Farm, employed four.
Squire Phipps at Chalcot House was the dominant figure in the village. He died in 1963. The “Lord Mayor” of Dilton was Mr. Sutton. Mr. Fred Ingram was the manager of the leatherworks and ran the cricket team. Mr. Fred Bailey ran the football club, practising in a field down St. Mary’s Lane.

There were four public houses in the village, two in Silver Street, one called the George and the other the Weavers Arms. These are both closed down, the Weavers Arms in 1907, but the two wooden panels still remain on the building which is now a cottage. The Masons Arms was opposite the Memorial Hall. There was also the Apple Tree Inn, owned by Mr. Red Rousell, (opposite the dairy), which closed in 1961, due to loss of trade.

There were 2 schools, the infants at the bottom of the village taking children from five years old. Children went to Westbury for schooling up to 1936 when Mrs. Rabbits became head-mistress of the British School (infants school) and Miss Shaw and Miss Lawrence were assistants. The top school was a church school run by Miss Hollard Barcham and her assistant Miss Elloway. The bell would rung on both schools up to the beginning of the war. The children started at 9.00a.m. and finished at 3.45 p.m. which an hour for lunch from 12.30 p.m. In wartime, the children had ten weeks holiday in the summer to make hay and pick fruit.
During the War there were three ARP Wardens, the chief being Dick Rabbits, and his assistant, Bill Gunstone, and the home guard was Mr. Gilbert Shepherd. There were 28/9 evacuees, mostly from East London. They were rough characters and stayed in the main part of the village, mostly in the council houses. Three bombs were dropped on the village during the war, and one cottage was lost beyond Bremeridge. The occupant, Mrs. Lawrence, was fortunately safe and unharmed.

The council wanted some way to commemorate the First World War, but the village was divided with Jo Hunt (at the bottom) and Jack Tupp (at the top). They could not decide whether to build a hall or a memorial, so in the end they did both. The Prince of Wales took responsibility to put up the memorial and the Kings Arms built the Memorial Hall (completed in 1923).
There have been a lot of changes in the past fifty years. Opposite Red Pit Lane (as it is now called) were three cottages, endways on to the road, originally owned by Tom Tuat and Bill Tickum, the third being empty. These have now been demolished. Opposite Orchard Green (now Greenacres) a few cottages still remain, the one at the end originally occupied by a black witch! Shepherds Mead, now containing over 100 houses used to be simply three cottages end on and two detached cottages. The rest was fields where the farmer at Red Pit Farm would graze his cattle. “Cuckoos Nest”, opposite the Prince of Wales, remains and was owned by Tom Gaskin. The council houses on the right-hand side of the main road were originally eight houses in “New Road”. These faced Mr. Jones’ father’s yard, a green-grocer and horse-dealing business. “The Crescent” and “The Avenue” (council houses) were built in 1933 and “The Circle” and “The Breach” appeared after the war in 1948 and 1954/5 respectively. The school playing field was part of the Vicar’s glebe land, and there was an orchard where the new vicarage is. Lyes Grove (old people’s home) was a sugar-pear orchard. There were originally weavers’ cottages all the way up to the garage. There is still an original weaving window (extremely large to let in the maximum light) at the house of William Minty, master-weaver. Friar’s Close was agricultural land, sited near the policeman’s cottage, (moved to “The Avenue” in 1936/7). “Dutts” was also farmland, owned by Phipps estate, and managed by Mr. Brown, who rented the farmhouse on the site. Petticoat Lane used to have grass growing in the road, it was only surfaced just before the second world war.

The railway halt first opened in October, 1937. The first train went to Trowbridge, Bath and Bristol. There was no porter; tickets were bought at the bungalow, owned by Mrs Mead, just before the bridge.
There were many ponds fifty years ago. One at Mr. Jones’ farm in Petticoat Lane; another at the back of the High Street; one at the topside of the present bungalows in The Hollow; Middle Pond opposite Chalcot House; Brad Pond on Church Walk, and Fish Pond in the fields behind Stormore.

There was no piped water until 1923, simply pumps. Water was originally offered by Mr. Phipps, but this offer was, fortunately, rejected by the Council as Mr. Phipps would have retained the right to turn it off for one day a year. The West Wilts Council eventually piped in the water. There was a laundry run by the two Miss Webbs, but it was for Chalcot House’s use only. The ladies had to cope with old fashioned pegs and mangles.

The first telephones were introduced in 1935, operating from the Westbury exchange. Boxes came in in 1938. There were regular bus services to Frome daily, run by Western National, Trowbridge. There was also a good post service, with three pillar boxes in Dilton Marsh, one by the Prince of Wales, another in the post office window (Victorian) and a Georgian one at the top of The Hollow.