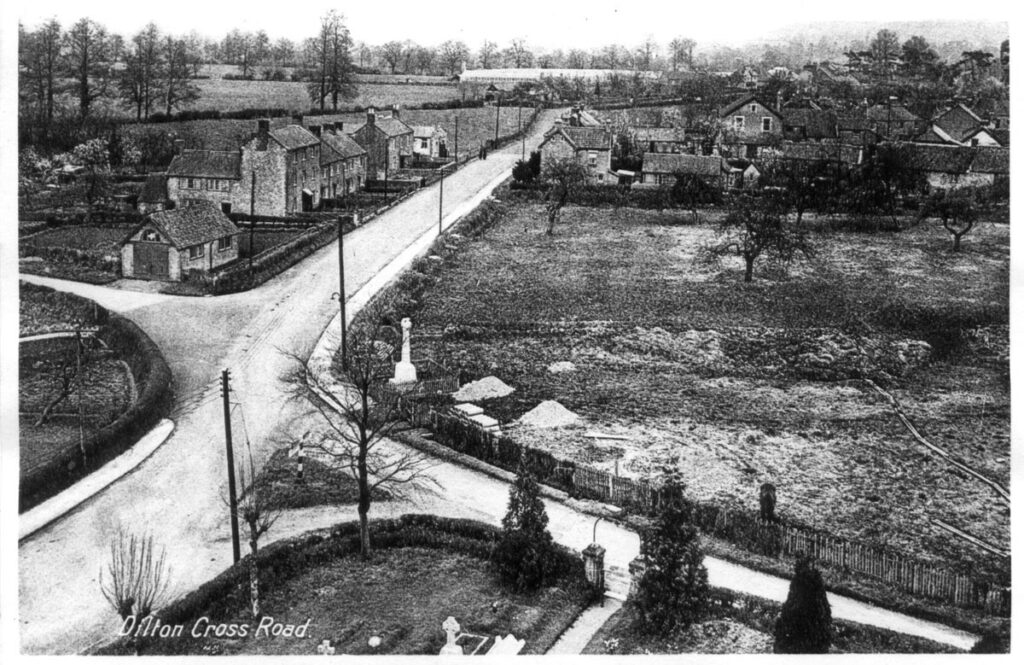 Civil parish created in 1894. Until 1934 included north-side of village street of Chapmanslade, but became separate parish in that year and south west corner of Dilton Marsh transferred to it. Little evidence of building before 18C. Most cottages 19C for hand-loom weavers. At time of Inclosure Award some of these craftsmen were allotted small parcels in front of houses.

By 1086, William Scudet, the King’s cook, held 4½ hides which was later to form the manor of Dilton.
William Dauntsey held 4 carucates in Bratton and Dilton by the serjeanty of keeping the King’s larder (1210-12), Will. Died c. 1221, succeeded by son, Richard, who held 4½ hides in 1236 and 1242 in chief by service in the King’s army. By 1250, Richard Dauntsey had alienated various holdings to a number of people, but on his death in that year, 4 carucates passed to his son Richard, aged 12, who died 1266, and the warship of his heir Giles was granted to William de Aete. In 1288-9, the manor of Dilton was in the possession of Richard (III), possibly a brother of Giles. Richard, son of Richard Dauntsey, died in 1315, holding the manor of Dilton for ½ knight’s fee and 10 marks annually to the castle guard of old Salisbury. Richard’s son (IV) died holding manors of Bratton and Dilton in 1348 and was succeeded by his grandson, John Dauntsey, on whose death in 1355, it passed to his brother, William. William was succeeded, before 1362, by another brother, Walter, who died in 1369, leaving as his heirs, Margaret, wife of Sir Ralph Norton, and his nephew John St. Manifee, son of his sister, Joan. St. Manifee conveyed his share to trustees for Sir Ralph and Margaret.

In 1380 the entire manor was conveyed to the Rector and Bonhommes of Edington, and in the following year re-granted to Sir Ralph Norton and Margaret and their issue their share in the manor with reversion to Edington. Margaret died childless and the manor reverted to the Bonhommes and remained in the ownership of that community until the Dissolution.

In 1540, the manor was granted to John Bush, brother of Paul Bush, the last Rector of Edington. John’s son, another John, mortgaged it in 1566 for £500 to Jerome Hawley who, 10 years later, took possession. Hawley sold the manor in 1587 to Sir Walter Hungerford and it descended in that family until 1684 when Sir Edward Hawley sold it to Sir Stephen Fox. In 1689) Fox sold to two persons, presumably trustees, for Thomas Phipps and Bridget his wife, who were in possession in 1693.

Thomas Phipps died c. 1715, and in 1721-2 his son, also Thomas (d. 1724) conveyed to Paul Phipps of Chalford (d.1722) and Paul’s sons John (d. 1739) and Thomas (d. 1747). It passed from Thomas to his son, another Thomas, who devised it in 1792 to his younger grandson, Charles Lewis Phipps, who styled himself of Dilton Court after the house he built on the estate. He died without issue in 1862, and the estate passed to his nephew Paul Phipps, who acquired Chalcot House (d.1880). From then followed the same descent as Chalcot House and Dilton Court, later called Chalcot Home Farm.

Owned by Henry and Nicholas Phipps 1585. Henry d.1600, leaving the property to his nephew Henry, son of Nicholas with remainder to Nicholas in default of male issue of Henry. Nicholas d. 1615 and livery of the manor was made to Nicholas’s son Henry in 1618, who died 1620, leaving an infant daughter, Christine. Livery in 1639-40 to her and her sister Margaret. In the same year it was sold to John and Edward Ash, where it remained until sold to Zachary Bayly, a West India Merchant, we owned it in 1689 and 1713. Passed to his son, Zachary, who sold it to his nephew, Bryan Edwards, who married Maria, daughter of Thomas Phipps of Leighton House (D.1792)