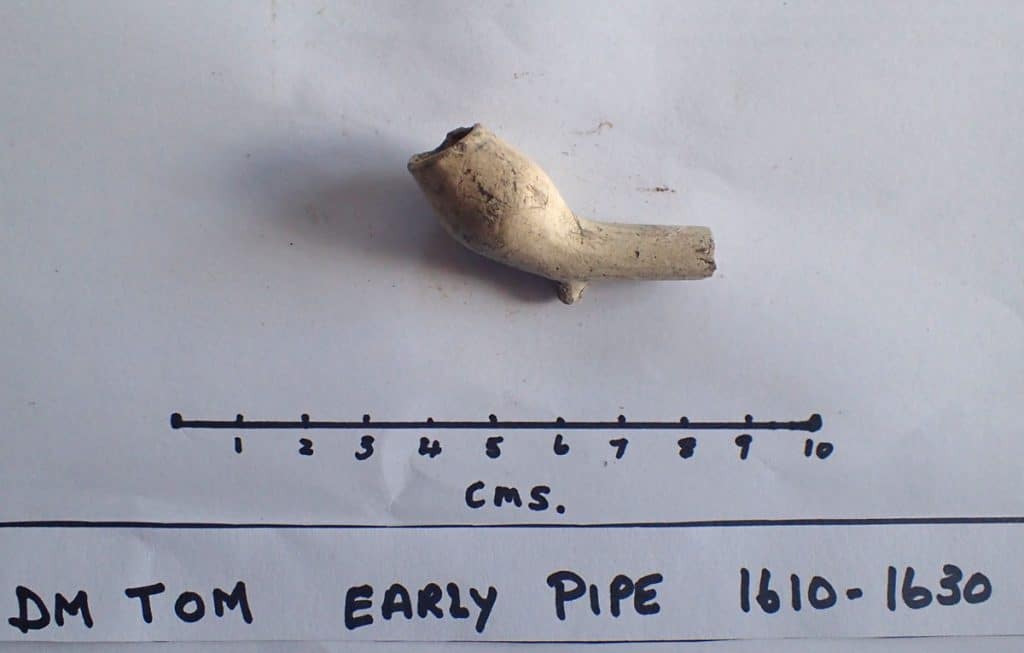 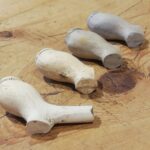 Clay pipes were being made in Dilton parish between 1640 and 1703. By the mid 1640s, digging for clay in nearby Chitterne had become a problem, and between 1647 and 1650 William Spender of Dilton was cited as being responsible for some particularly dangerous pits there. Spender died in 1694, and a pipemaker in Westbury Leigh, Thomas Smithfield, carried on making pipes in the area until his own death in 1703. Though Smithfield is for the large part recorded as living in Leigh, it is of note that his son Thomas was buried at Dilton in 1685 and buried there two years later, and it is possible that he was living in Dilton for a short period. Pipes stamped with Thomas Smithfield’s name are not uncommon in the area, but to date only one pipe possibly attributed to William Spender, stamped with his initials, is known, and was found in Warminster. The Dilton project is therefore a unique opportunity to discover more pipes which can be attributed to these two makers, not just examples with both known and previously unknown makers’ marks, but also pipes on which William Spender saw no need to leave his mark.

To date, a good quantity of clay pipes, including a number of bowls, have been found during the Digging for Dilton project. So far, no stamped pipes have been found with the marks of either Spender or Smithfield, but a number of equally interesting exampled have been found. At the Old Manse, 22 High Street, several pipes from the same mould are of particular interest as they are what is known as kiln or workshop waste – pipes which were either overfired in the kiln or broken on the workshop floor during processing and packing. Excavations in the garden and close examination of the flower borders, however, have not yielded any of the tell-tale evidence of a kiln having existed on the property, evidence which is always found around and around a kiln site. It is therefore possible that the pipes were deliberately tipped in the field where No.22 now stands as part of a dump of workshop waste. At Norton St Philip and Rode, the major pipe manufacturing villages of the West Country in the 17th century, the vast quantities of ash and pipes generated during the manufacturing process were all tipped and spread out in the local fields, and the same would have been done in Dilton Marsh. These were the days before the advent of skips and the dustman, so industrial and household waste was always disposed of nearby. 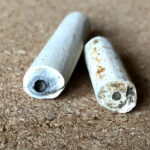 Whereas some of the large number of stems found during the project could have been made in Dilton, all the marked pipes, though very few in number, all come from outside the parish. From the 17th century is just one pipe, with the initials MM and made in Norton St Philip, found at DM76517/002, while there is also just one example from the first half of the 18th century, a stem bearing the initials RG of Richard Greenland of Devizes, found at DM76517/001. All the other pipes with a maker’s mark date to period 1780-1810, and bear the initials IS of Joseph Smith, who worked in Bath and supplied pipes to this area of West Wiltshire for a short period. There is one such example from DM 21 SML 17 001, and two from 22 High Street, where several other pipes of the period, albeit unmarked, have also been found. Pipes from the remainder of the 19th century, and indeed the early 20th century, when the cigarette took over from the humble clay, would have been brought in from Bath, Bristol, or occasionally Salisbury, although none with makers’ marks have been found so far. There is one decorated bowl, with a holly leaf on each side, from 14 High Street, while from DM 11 RP 17 003 is a large bowl of a style which was commonly aimed at smokers of an Irish background.

It will be of particular importance to discover more pipes in Dilton Marsh, as so much is documentary information is known about William Spender and Thomas Smithfield but so little is known about their pipes. During his 54-year working life, Spender would have had a number of moulds, and there is little doubt that he used a number of maker’s marks, quite probably including examples with his full name. Whereas pipes break easily, the fragment with the makers’ marks always survives, and either await discovery or have already been found and simply await being reported to the project members so that they can be recorded. So, if you have found any pipes in your garden or in a field, however small the pieces might be, contact the project so that they can be looked at. In return, you will be provided with a date, and possibly the name of the maker, to take home with your pipes.

The History Society now needs your help in determining our future development. To some extent we have all been in a state of uncertainty with Covid...

END_OF_DOCUMENT_TOKEN_TO_BE_REPLACED

The Talk by Ruth Butler “Women in WWl“ has been postponed.

Dilton Marsh Local History Society have agreed to postpone the talk by  Ruth Butler from  "The Chippenham History Centre"  on “Women in WWl“ scheduled for...

END_OF_DOCUMENT_TOKEN_TO_BE_REPLACED

Dilton Marsh Local History Society would welcome contact from anyone who was employed, or had relatives / contacts employed at the Charles Case Tanyard, and...

END_OF_DOCUMENT_TOKEN_TO_BE_REPLACED

A talk by Sally Hendry from Westbury Heritage Centre about her research and the restoration of the Quaker graveyard in the town. Dilton Marsh Memorial Hall...