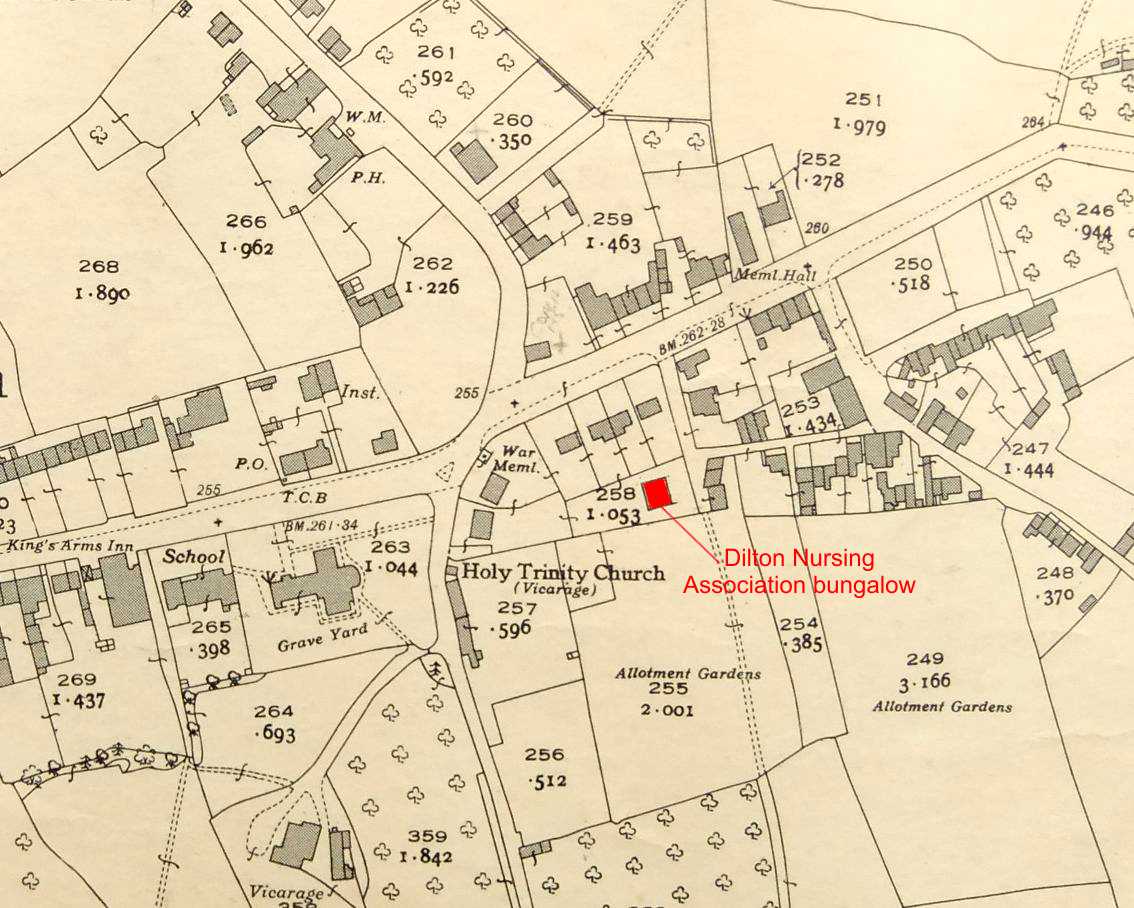 On the death of Mr. William Gunstone in 1988, his daughter was clearing his house and found the minute books and a ledger of the Dilton Nursing Association, of which her mother had been Secretary from 1962 to its cessation. The small attache case with these books was passed to Mrs. Nin Robinson, who had lived all her life in the village, and she passed them on to Margaret Sanders for ultimate depositing in the Record Office.

The books date from 21st March, 1919, when the Committee, which had been elected by the Parish Meeting held on 17th March, 1919, met for the first time. The Rev. West, the Vicar of the parish, was in the chair, and there were seven members of the committee, all men. It was agreed that the Dilton Nursing Association be formed, and that subscribers of 10/- be entitled to the services of the nurse. The position of nurse was to be advertised. By the next meeting on 20th May, 1919, a nurse had been obtained on probation.

The fees for a confinement would be 15/- for subscribers and 30/- for non-subscribers, and that patients would have to pay for all dressings, etc. Difficulties concerning accommodation for a nurse were experienced, and throughout the early life of the Association, the length of time that each nurse stayed in her job was relatively short, and problems were experienced in obtaining replacements.

The saIary offered in the early years was £120 per annum. By 1928 this had increased to £133 p.a. In that year, the problem over the nurse had been that of intoxication, and she had had to resign. Although Annual Meetings of the Association are referred to in the Committee Minutes, it is not until 31st May, 1923, that the first minutes of an Annual Meeting are recorded. The nurse reported that there had been 34 midwifery cases, 347 maternity visits, 607 ante-natal, general and casual visits, 238 Health visits, 36 school visits and 43 home visits to school children, making a total of 1,352 for the year. (See table of visits) In 1928, there were problems concerning the competence of the new nurse, and complaints about her “indiscretion”.

The minutes of several meetings, although couched in formal language, reveal some considerable disagreement over the behaviour of the nurse. Legal opinion was sought, and the nurse was given notice to terminate her employment on 31st October. She, however, considered she had not been fairly treated, and a summons was issued against the Association, claiming salary up to 13th November. The Court upheld the action of the Committee and costs were awarded against the nurse of £2-7s-0d. Despite writing to the nurse for payment of these costs, no reply was received, and it was finally decided not to pursue the matter.

The replacement nurse was not prepared to accept the salary offered, and finally accepted £145. It was also agreed to provide a bicycle for the nurse. At the Annual Meeting in 1929, the Chairman said that Dilton was a pioneer in providing a Nursing Association, but he hoped that it would not fail for lack of support. During the ten years of its existence, “they had been fortunate in not losing scarcely any mothers or babies in their maternity cases”. The difficulties over the nurse had resulted in the finances being “on the wrong side”. Problems over the new nurse continued, as, in August, 1929, it, was reported that she had had a breakdown and had been taken to Devizes Asylum. In order to fill the post, the Committee had to raise the salary to £150 a year.

The nurse who was finally appointed, after having a number of temporary nurses, was obviously not only fully qualified, but did her work well and was liked in the village, as when she announced her impending marriage in 1930, a collection of £3-4s-0d, was made and an easy chair and cushions purchased and presented to her at a “Social Evening”. However, this nurse resigned in October, 1931, having, from the wording of the minutes, had some disagreement with members of the committee. Financial problems continued, with lack of support being the main difficulty, and by 1933 there were further problems with the departure of the Vicar who had acted as both Chairman, Treasurer and Secretary for a number of years. By May, 1933, the first ladies had been appointed to the Committee, the Hon. Mrs. R. B. Atkinson had been made Chairman, and presided over the Annual Meeting “when there was an excellent attendance”, very different from the several years in the past when the minutes had recorded poor attendances.

The new blood on the committee had considerable effect, as the collection from subscribers of £42-12s-6d is recorded as being the highest during the existence of the Association. At the Annual Meeting in 1934, over 100 people attended, holding the meeting in the afternoon “giving the lady members an opportunity to be present”. Although the financial position was still rather precarious, £50 had been received from the Sister Elizabeth Charity, which had helped the situation greatly. By 1935 the membership had increased to 219, this enabling the budget to be balanced for the first time for many years.

A fete in the grounds of Penleigh House in 1936 had made a profit of £27-1s-7d. Two of the original committee members died in 1937, and were greatly missed. In 1939 it was agreed that Old Age Pensioners who could not afford the subscription of 5/- per annum should have free attendance. In June of that year the Association received an interest free loan of £200 from the Wiltshire Nursing Association for the purchase of a house for the nurse, and later an anonymous loan of £100 at 2½ % interest, for the same purpose.

A bungalow was purchased, for which the nurse would pay a rent of 9/- per week, rates and 10/- a year sewage maintenance. It was agreed that the house would be called “The Dilton Marsh Nursing Association’s House”. Although reference is made to the purchase of a bungalow house from Mr. Brown, for £450, no address is given. From other information, however, it is known to have been the first bungalow on the right hand side in Whitecroft. In 1940 reference is made to the installation of the telephone, but due to the war this could not take place until 1945. On the change of nurses in 1943, the builder charged £8-17s-0d for distempering three rooms, repairing windows, putting up curtain rails and creosoting the shed.

At the Annual Meeting in 1944 it was noted that the loans for the purchase of the house had been paid off, principally due to fund-raising activities by the Committee. In 1945 it was agreed to start a repair fund for the upkeep of the house. In 1946, a porch was added to the back door and certain repairs carried out. ln 1948 the nurse was authorised to put in gas at her own expense, and the Committee paid for a “plunger” in the hot water tank at a cost of approx. £15.

The Association were unwilling to rent the bungalow to the County Council when the new Health Service came into operation, but, were willing to sell it at an agreed valuation. The minutes of 11th October, 1948, show that the price was the subject of some dispute, and the Committee offered the house to the County Council for £900, subject to maintaining it as a residence for the Dilton Nurse. As the C. C. were not willing to accept this condition, it was finally agreed to sell the bungalow for £1,000 “without imposing conditions”. The War produced a number of interesting minutes. For instance, the nurse was instructed not to visit maternity cases during an air raid unless she was sent for. By early 1947 concern was being expressed about the future of the Association due to the coming into being of the new National Heath Scheme.

The last Annual Meeting was held on 27th April, 1948, when it was noted that the Association had been started 29 years before, and that the subscription had remained at the low figure of 5/- largely due to the number of subscribers and the receipt of grants each year from the Sister Elizabeth and Castley Charities, and at the beginning from the Goff Charity.

The Association agreed to pay Nurse Matthews, who had served the village so well for many years, and whose health had broken down under the strain of the work, the sum of 10/- per week “so long as funds permitted in recognition of her services to the district and as she was not qualified to receive a pension from the County funds”. A meeting of old subscribers was held on 6th December, 1950, when it was noted that the Association had handed over to the County Council on 6th July, 1948, from which date the Council had taken on all nursing responsibility. The grant to Nurse Matthews was confirmed, and it was agreed to invest the funds of the Association, and “that the Committee shall have power to distribute towards the relief of sick parishioners such parts of the funds as they in their sole discretion think fit.”

A new Committee was appointed, and the Vicar, the Rev. Fussell was appointed chairman, Grants were approved for various items such as the cost of a car to Bath, and a rubber mattress. £900 was invested, leaving the remaining funds in the Bank current account. In view of the funds available, it was agreed at the first annual meeting after the hand over to the C.C., that the grant to Nurse Matthews should be increased to 15/- per week. In 1953, the Rev. Sercombe replaced the Rev. Fussell as chairman. The Association agreed to pay for the erection of a garage costing £200 for the then District Nurse, even though this would become C.C. property when built. They also sent £100 to the Wiltshire Nursing Association Pension Fund.

This dates from 1945 and covers the period to the end 1955. There is a hand written balance sheet for 1955/56, which includes the purchase of Nurse Matthews’ annuity. Deposited at the Wiltshire Record Office by Miss J. M. Y. Sanders 14th February, 1990.