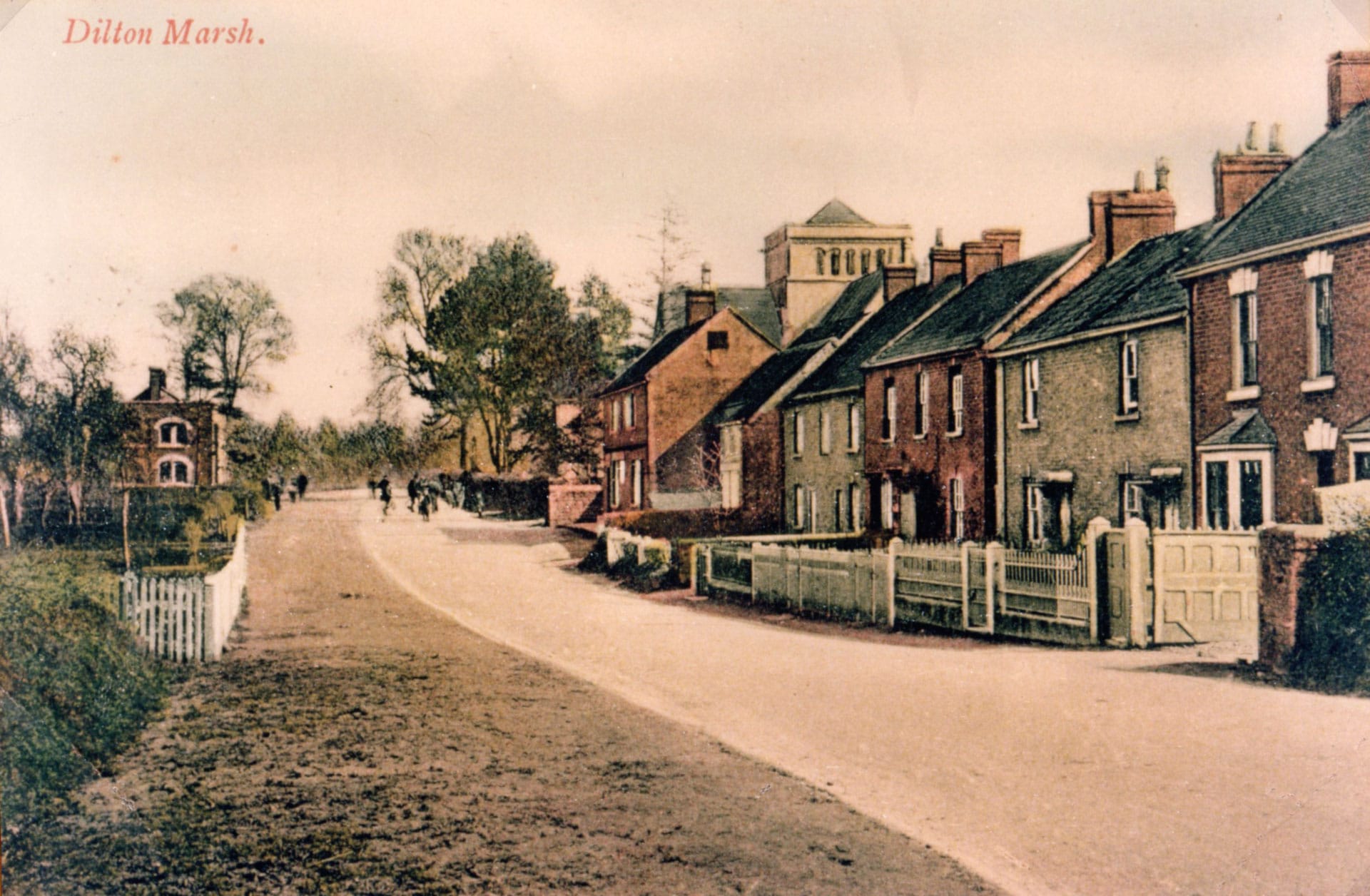 The diary was written by Frank Parsons who lived at Grenadier House seen on the right of this picture. The buildings and yard behind the house was where the Parsons family ran their building and carpentry business for many years.

Thomas Parsons, born in Westbury about 1824, developed his building business in Dilton Marsh from the mid 1800s. He had followed his father’s trade as a carpenter, appearing on the earliest Census in 1841 as a carpenter’s apprentice. Thomas married and had 6 sons, all of whom went into the building trade and specialised in carpentry and joinery. The firm built a number of houses in Dilton Marsh and Westbury. By the time of Thomas’s death in 1895, his two youngest sons were running the business from premises in the High Street and the family owned several houses which were rented out to provide income for his widow.

The road through Dilton Marsh was not called High Street then, and there was no numbering system for the houses as we have today. So, although a lot of information can be found by looking at the Censuses from 1841 to 1901, it is sometimes difficult to say exactly where people lived.

Fortunately, a few account books and other papers dating from the end of the Victorian era have been kept and these give an insight into aspects of life at the time. One of Thomas’s sons was Frank R Parsons, who lived at the High Street property. He kept a journal around the turn of the century in which he recorded many of his daily activities.

The journal begins in 1898 and reflects the everyday life of a local tradesman – working six days a week and worship on Sunday.

Frank Parsons was a devout man who attended services at Penknap Baptist Chapel on Sunday morning and evening, and was also involved with the Sunday School there in the afternoon. There would often be visiting Preachers at these services and sometimes he would travel to other Chapels in the district to hear a different speaker.

His working week consisted of various carpentry jobs and organising materials for some of the projects that the firm was involved in. “Looking out stuff” is a phrase used frequently, and working in the yard and “shop”. This refers to the large workshop behind his house in the High Street. He also did estimates and paper work.

Being a Carpenter he was able to make coffins and this was a regular feature of his work. It is not clear from the journal whether he acted as Undertaker, although there is mention of having to “fetch a corpse”, and he would usually attend the subsequent funeral.

People did a lot more walking in those days. References to “driving “ meant using a horse and trap. There must have been a number of properties in the village with outbuildings that were used to stable a horse or pony.

Although work was hard, there was time for recreation too – with an occasional day out. He took an annual holiday in the autumn, usually visiting relatives in different parts of the country. A week’s holiday in October 1898 began in Winchester where he was unimpressed by the Service held in the Cathedral!

Christmas was a modest occasion, centred around attendance at Chapel. However, time was made for family visits, and work resumed on 28th December.

Easter was purely a religious observance, without any of the extras we have today. Despite being a Chapel-goer, it seems that work continued normally on Good Friday. But there was a day off for the Bank Holiday on Easter Monday.

Christmas Day 1899 is also unremarkable and the dawning of the 20th Century goes by without comment!

The Diary continues throughout 1899 but stops abruptly in April 1900. His mother died later in 1900 and this may explain the break in the writing. However, the entries resume in March 1901 and continue with more variation as it is during this year he gets married. There are frequent visits to see his bride-to-be at her parents’ home in Potterne, often travelling there by train. There were many more stations at that time.

Preparations for the wedding are fitted in around the regular workload and he later wrote a detailed account of the Wedding which was held on Bank Holiday Monday at the beginning of August. They honeymooned in Weymouth and Torquay, returning by early September.

Daily routine continued with the couple regularly attending Chapel and occasionally walking into Warminster on a Sunday afternoon to have tea with relatives and go to Chapel there in the evening before walking home again.

Being in business, there are many references to local places, people and events. These include the meeting to discuss the future of Westbury Ironworks, selecting and buying timber from Longleat estate, and preparing estimates for work at various shops and premises in Westbury, including the Cottage Hospital.

One unusual entry refers to using the services of a Water Diviner to find out where to sink a well. Co-incidently, a rather tragic occurrence relating to a well is reported a few days later.

In 1902, the Coronation of King Edward VII planned for June was postponed. It appears that there was a celebration in Dilton Marsh anyway – maybe they had already organised the food – there were no freezers to preserve things in those days! There is no mention of any festivities in the village on the revised date for the Coronation.

The final page is from November 1902 when the couple enjoyed another walk to Warminster. Probably the “black berries” referred to are on an autumnal shrub or tree along the way. Surely November would be rather late for Blackberries!