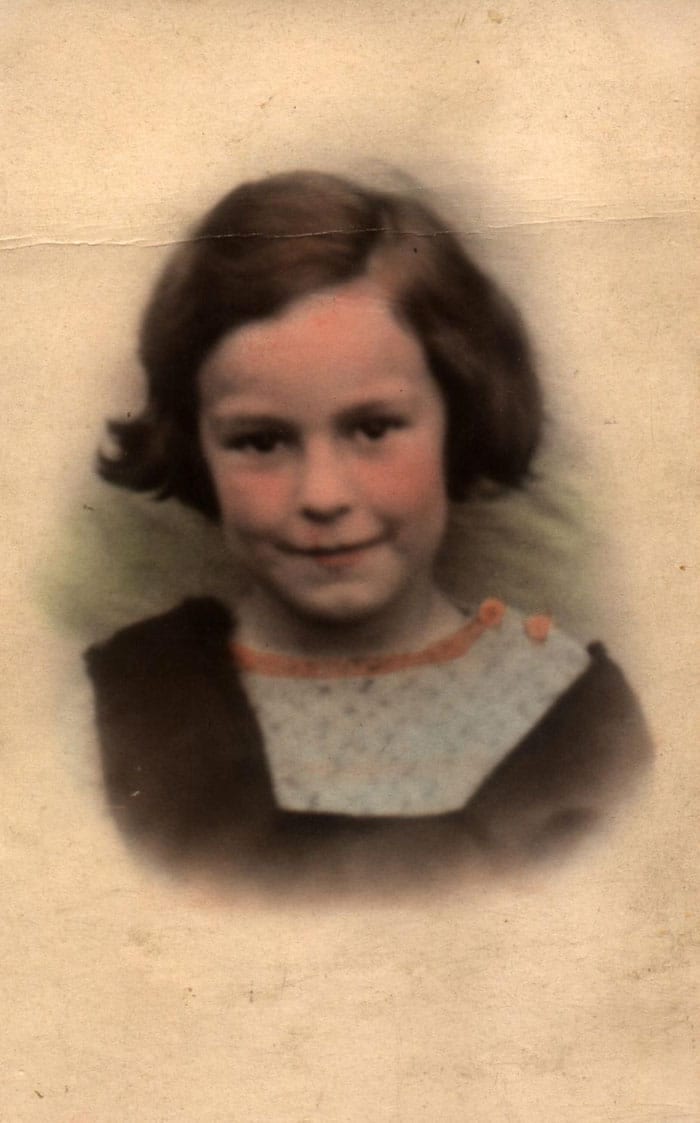 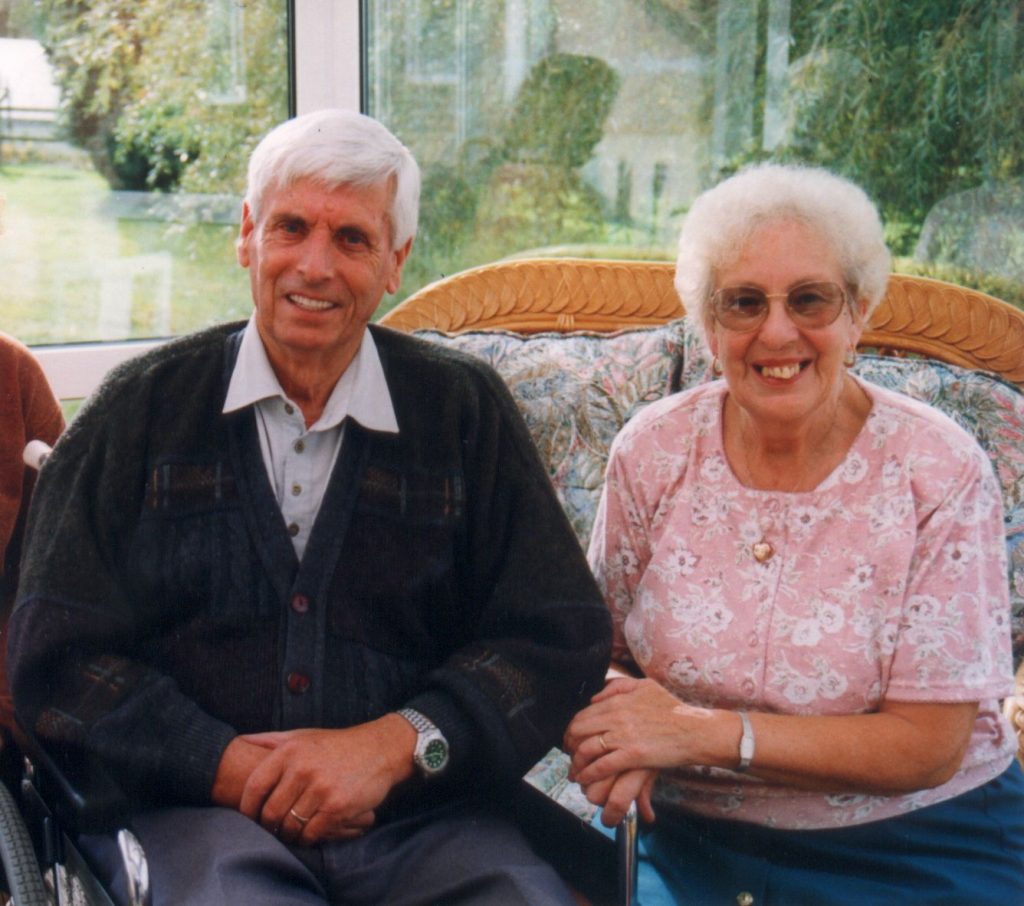 My father was Herbert Frank Loder from Trowbridge, and my mother was Sarah Ann Mitchell who came from Dilton Marsh. She was one of seven children, and her mother had been born in Westbury Leigh.
My parents were married in 1926 in Westbury Leigh Baptist Church, and had their wedding reception in Dilton Hall.
I don’t remember my grandfathers. Both died before I was born.
I was born Phyllis Loder in 1930 in 40 Petticoat Lane, which is still named ’Ancient Lights cottage’. It was called that because they couldn’t build in front of those windows. It was very cramped as it was one-up, one-down.
I lived there until I was three years old. I was my parents’ only child. Then we moved to Upton Scudamore for two years, then when we moved back to the village we lived in the last cottage on the left at the end of Slob Lane (now called St Mary’s Lane. From there we moved to 141 High Street (Park View Terrace).

My grandmother’s health was poor, so for a time my Mother and I went to live back with her in 40 Petticoat Lane.
After we left 141 High Street, a family of evacuees came to live from London, to get away from the bombs. They stayed there until the war was over. One of their sons still lives in Westbury. The came to Dilton because the woman’s sister had come to live in Petticoat Lane.

My father had poor health. He suffered shell-shock in the First World War. Although he made a gradual recovery at first, he was involved in an accident in Tower Hill when I was six months old. I think a wheel came off the bus he was travelling in. The shock of the accident put him back, and he was in and out of Roundway Hospital after than until he died when I was seventeen.
I remember going to see him in Roundway. We had to cycle to Chalford and leave our bicycles in someone’s garden there, before getting the bus to Devizes.

I went to the Church of England School, which was still separate from the other school when I started. However, in 1937 the schools merged. Those under 7 went to the school further up the High Street on the right. The children who were just under 7 had to go to the chapel school until they reached 7, when they returned to their original school.

It had three classrooms. There were 15 children in my class and about 50 children in the whole school. The Headteacher when I went there was Miss Barcham – she lodged with a Mr and Mrs Jones. At the right hand side of the school was a house built where the caretaker and his wife lived – Mr and Mrs Potter. Mr Potter only had one arm as he had lost one in the First World War and had a hook to replace his hand. The minister at that time was Revd Mackenzie. He came into the school regularly.
We used to sit two at a desk. The ink monitors had to go out the back and mix the ink powder with water to make ink to put in the inkwells. Each morning when we went into school we had to put our hands on the desk so Miss Bartsham could inspect our nails to make sure they were clean.

It was very strict and structured, although we were never beaten.
Most children went home in the middle of the day for dinner. Only the ones who walked down from Hisomley and Old Dilton stayed at midday, and those who came from Rudge. Children from Rudge came to school on a charabanc driven by Mr Millard who owned Dilton Motors.

I remember having lessons in arithmetic, spelling, sewing (for the girls), and going on nature walks. I also remember a row of jam jars along the window for children to bring flowers from their gardens at home.
We had a stove with a guard round it in the classroom for heat. When the milk came in the winter, they used to put the milk by the stove to thaw out.

At the age of 11 I went to Lower Road (Leigh Road) School at Westbury. I left there at the age of 14 to work in the George Jeffries, glove factory, Edward Street as a prixseam maker.

I was nine when the war started. We were all allocated a pew in the church. When an air raid warning went off, we had to go into the church and lie under our allocated pew with out head nearest the outside walls.

There were occasional stray bombers. I remember when one went along Lower Road (Leigh Road) on a Saturday afternoon, a bomber was coming back from raiding Bristol or Bath and they dropped a bomb on a bungalow along Leigh Road. No one was hurt. Mrs Bathard was cycling on her bike at the time and got hit by a bit of shrapnel.

There was a camp of Nissan huts built at the top of Hisomley on the left before you reach Dilton Court Farm. These were used as an American transit camp. The soldiers used to walk about the village in uniform. Every Friday night there was a dance in Dilton Hall, when a lot of the troops attended. One week I remember Alfie Bartell from The Bell at Standerwick playing the piano for dancing, accompanied by another man had a tea chest with a pole and string coming out of it. The other people who regularly provided the music for dancing there were Freda and Frankie Scott from Westbury.

Everyone shared during the war. We had a rabbit most weeks. Percy Pollard used to live opposite the King’s Arm and he used to get rabbits. My aunt’s husband worked on the railway and used to trap rabbits as well.

I went to primary school with my future husband, Raymond Edwin Harvey. 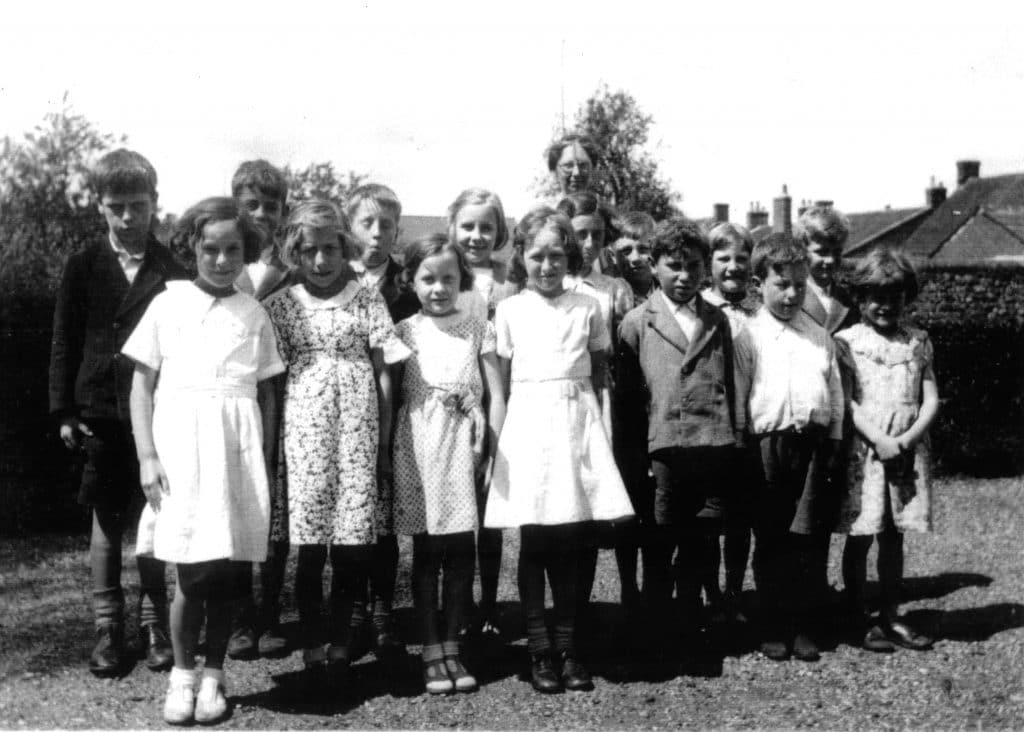 Raymond’s parents were married in Dilton Church in 1921. I still have her wedding dress. When they were first married they lived in St Mary’s Lane, until they moved to Penleigh in 1923. It was in Penleigh that my husband was born, where the Singers now live. When he was seven years old they moved to Bowyers Terrace in Fairwood Road.

He straightaway started his two years’ National Service – from 1949 – 51. He was in Berlin with the Horse Guards. Whilst there he submitted plans to the Westbury and Warminster Council to build own house. We had to get a permit to build privately. There was strict control on the number of private houses which could be built as housing materials were in short supply, and priority was given to council housing.

When Raymond finished his National Service, he went to work for Campbell Millard, the undertaker, whose buildings were sandwiched between Horny Lane (now Honey Lane) and the railway embankment on Tower Hill.
Our house was started in 1951 and took two years to complete. The Dilton Brick Works used to be opposite Penleigh Farm, where there is now a small industrial estate. It was owned by Mr Brewer. Our house was the last one to be built with Dilton bricks; the Brick works then went on to produce pots rather than bricks. I remember Raymond and his brother pushing the bricks for our house up through the village on a cart.

The Marshall brothers from the village were all bricklayers by trade, and did all the brickwork for our house.
When I got married there was an outside tap and no electricity. We had a gas ring for boiling the water.
After working for Campbell Millard for six years, Raymond went back to work to Holdaways. He worked his way up to become a site agent.

In the 1930s there were ten shops in the village:
1. At the bottom of Tower Hill, on the corner of Horny Lane (now Honey Lane) – Mrs Millard next to Campbell Millard’s undertakers.
2. Halfway down Stormore house on right – Miss Davis’s
3. Tommy Allen had a shop opposite the Green on the left as you turn into Stormore. He used to deliver on a bike.
4. Ken Bull ran the shop next to the Prince of Wales pub.
5. At the old Post Office (next to Dilton Motors) the shop was run by Mr Forward (who was the deacon at the Westbury Leigh Baptist Church) and Miss Gaiswood (his housekeeper)
6. Mr Gunstone had a shoe repair business at the shop where the current hairdressers is
7. Mr Millard owned the shop which is now Spar.
8. The same Mr Millard owned the bakehouse along Whitecroft (it was subsequently owned by Percy Jones)
9. At Dividend House there was a Co-op store with a manager there with two assistants
10. Mr Shepherds shop was at the back of Macey’s, where he made his bread.
Although I only remember two pubs – the Prince of Wales and the King’s Arms – my mother could remember when there was a pub along Silver Street.
We used to get deliveries from James Colliers’ (opposite the Vista cinema in Westbury) of paraffin and oil and gas mantles.
After the war, there was a real push to get a Services Club in the village. There were a number of fundraising events in the village. It was originally a Nissan hut brought down the Hollow on trucks and rebuilt on current site in 1948. I remember the Grand opening – the place was packed out. Mr Shepherd (who owned the bakers at the back of Macey’s) gave the majority of the ground for the club. My father-in-law was the Secretary.
Mr Shepherd was the officer in the Home Guard and they used to practice in his yard.
NB. I have some deeds showing Petticoat Lane in 1790, which said that it was then called Maggott’s or Maddox’s lane.