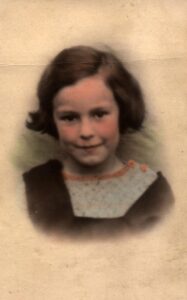 I was 9 years old when war broke out and 15 years old when it ended. I lived at 40 Petticoat Lane with my mother and grandmother. My father had been severely affected by shell shock from the first world war and did not live with us at that time, he was in hospital in Devizes.

Earliest memory, sitting round table at home listening to the radio waiting for the announcement from the Prime Minister that war was being declared. Some village people who were in the Territorial Army had been called up 2 weeks previously.

I went to Dilton Marsh Church of England school, next door to the church. There were two schools in the village, the other school was the British School (opposite Powells Lane in the High Street). These were run as separate schools until 1938 when they were merged and split into Infants and Juniors.

The headmistress spoke to us at school and told us that we would have to help with the war effort. The school ran a ‘save for the war effort’ National Saving Stamp. After a few months we were issued with gas masks and had gas mask practices at school every week. We also practiced what to do when there was an air raid warning. Each child was allocated a specific pew in the church and we laid under the pew with our heads to the wall. There were a few actual air raid warnings and one afternoon there was a bomb in Leigh Road, some shrapnel hit Nora Bathard from the village who was cycling along the road at that time, luckily she only had minor injuries.

When I was 11 years old, I transferred to Westbury Senior School, now known as Matravers. We were each allocated one lady and one man from the village who had joined the forces to be pen pals – mine were Peggy Swan in ATS and Les Painton in Army. We knitted ‘comforts’ (gloves and socks) for the forces. In the summer holidays we had to work some of the time on agriculture and horticulture. I worked hoeing a field of cabbages at the top of Sandhole Lane, Westbury Leigh and me and 2 friends did the whole field. We were paid for this work. The school asked us to collect conkers as they contained something to help heal burns – the collection point was Morland’s shop in Church Street, Westbury and my friend and I pushed a sack full over on the cross bar of her father’s bike.

The church bells were not rung during the war. The road signs were either painted over or removed. Westbury White Horse was covered over. There were village air raid wardens who checked no lights were showing through blackout curtains. Also, bicycle lights had to be painted black on the top half. We had tape across the glass in our windows to stop the glass shattering. We didn’t have an air raid shelter at home, but some families did. When there was an air raid we got under the kitchen table.

I can remember the school announcing evacuees were coming to the village. I waited in the High Street after school to watch them arrive. Harry Millard who had a taxi and bus opposite the school where Dilton Motors is currently, which he ran with Mr Huntley (known as Millard and Huntley) and they also had a lorry used to deliver coal and to collect ashes. The ashes were dumped at Fairwood Road just opposite where Alison Irving used to live. Mr Millard collected the evacuees from Westbury station. Villagers who had been allocated to take an evacuee met at the school. Rev. MacKenzie and some other ladies from the village had clipboards taking the names of children as they arrived. My friends and I waited to see who was allocated which children and the following day the evacuees started at the schools.

Home guard – I watched the home guard for the village practice in the yard of 42 Petticoat Lane from my bedroom window. 42 Petticoat Lane was owned by Gilbert Shepherd and his wife, and they ran a bakery from the yard and a grocery shop from the front. The leader, Mr Shepherd had been in first world war and they were issued uniforms like on Dad’s Army.

Employment – Leigh Leather Works (tannery), Brick Works (Fairwood Road), Farms (about 7 or 8 in the village), Railway, Bolton’s Glove factory (Westbury Leigh), cloth mills (Westbury). The tannery produced leather for army. My mother went to work at the tannery as men had been called up and she had to do a man’s job on a glazing machine. Suttons nurseries.

Bolton’s and Jefferies (Westbury glove factory) produced gloves for the armed forces. The cloth mills produced material for forces uniforms. A silk factory was established in Indigo Lane during the war, Westbury and this produced underwear for ATS, Wrens and WRAFs.

The Imperial Cigarette Company transferred from London into part of Bolton’s factory and produced cigarettes specifically for the forces.

Two of my aunt’s from the village did carriage cleaning at Westbury station, before they had children in 1943. This work was shift work.

My husband, as a child lived in Fairwood Road. The crates from the GIs deliveries were dumped in the brick yard. My husband was an apprentice carpenter (1943 – age 14) with J. Holdoway in Westbury and he used the wood from the crates to make wooden toys and other household objects.

In 1944, I started work at Jefferies glove factory in Westbury and cycled to work. I made MT gloves for dispatch riders and truck drivers in the army. I also made gloves for officers.

We were issued with ration books and registered to use them at specific shops. My family were registered with the Coop for grocercies, Bull’s butchers in Westbury for meat. Then clothing coupons were introduced – my friend got married in 1948 and I had to give her coupons for my bridesmaid dress but they were withdrawn shortly after that. We got our milk from Broomfield Farm, Petticoat Lane – the cream from the top of the milk was used to make extra butter. We had a rabbit for dinner about once a week – roasted or stewed, it was lovely! My grandmother kept chickens in our garden, to give us extra eggs and for Christmas dinner! Extra eggs produced during the Summer were stored in an enamel coated bucket filled with ‘icing glass’ and they lasted through most of the winter. My mother and grandmother also grew vegetables on an allotment behind our house (which is now part of my garden). Families shared plums, apples and other fruits – these were bottled or made into jam. Runner beans were put into glass sweet jars and packed between layers of rock salt which was bought as a block from the Coop.

When I cycled to work in Edward Street, I passed Fontenville House (now the High Street). This was an American army camp with huts (which were used to house evacuated Londoners after the war). This was the first time I saw black GIs. Bowyers House (Tanyard Lane) was occupied first by British soldiers, then by GIs. Courtleigh House, Westbury Leigh, was occupied by British army. The Commission Board, Warminster Road, Westbury was an British army camp during the war. I remember an American army camp on Court Farm, Hisomley and white GIs walking around the village and going to the dances at the village hall every Friday night. Entertainment at the dances was Frankie and Freda’s dance band from Westbury, or Alfie Bartle (landlord of the Bell at Standerwick) on the piano with Alec Withers on the tea chest (homemade instrument with pole and string)! Villagers also performed in concerts in the hall – singing, performing sketches, playing instruments. One of the GIs had a UK wife (from Northern England) who stayed with us when she visited him one weekend. He gave my grandmother some tins of fruit to say thank you.

Land army women worked on the farms, some were living with village people and some were at the land army camp where Phoenix Rise is now in Westbury. Many land army women married villagers after the war and stayed in the area. Italian prisoner of war camp was also in area of Phoenix Rise, and some trusted prisoners worked on the farms in the district.

I can remember some families receiving telegrams telling them that someone had been killed in their family. The first one killed, was Mr Curtis, Silver Street who was on Ark Royal when it was sunk. Mrs Bishop who lived opposite us in Petticoat Lane lost two sons. Some villagers who fought in the war were captured as POW.
I remember seeing trains full of troops passing through the village, especially as D Day approached. Some families had railway workers (mostly drivers and firemen) staying with them as they were moved to Westbury area from other part of the UK. My Aunt had two firemen (from Weymouth and South Wales) lodging with her and her husband. Opposite Westbury station some accommodation was put up to house some of these railway workers, known as the hostel.

Many village men were not enlisted because they were in reserved occupations on the railway and farms.

A few village women married GIs and went back to America with them at the end of the war.

Some village boys did a bit of wheeling and dealing with the GIs at Hisomley e.g. Brian Geary who delivered newpapers to the camp and was an evacuee, also my cousin.